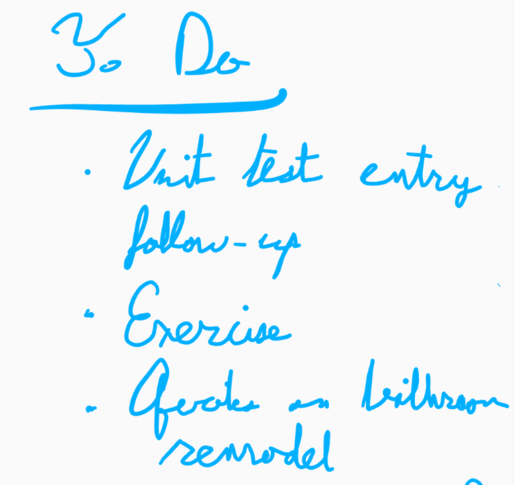 I bought a phone with a built-in stylus not too long ago. My old phone was on it’s last legs and an attempt to change the battery did not go well.

The thing I am enjoying the most is the ability to write hand written notes. I’ll wake up before the rest of my family, open up the note app, review and think about priorities. The tactile interaction of writing by hand really helps clear the head. I write notes slowly, rewrite poor handwriting until it looks nice, and make a point to revel in crossing out done issues before erasing them and reordering the list. The app has the look and feel is that of a dry-erase board. At work, I’d use a board to write out to do lists when I was having trouble focusing on what I needed to do next. Having the stylus and app and home has been an improvement on that. I can have infinite lists, maintain a work to do, a home to do, a running to do, and another board for free thinking. It works as long as I keep the lists short and stick to items that are immediately actionable. I’ve a list item listed as writing on writing that I look forward to crossing out as soon as this is done.

After this entry, I am going attempt to convert this blog to a static site. As a blog , it doesn’t really work. I also miss having entries stored in git. As is, this app is tightly coupled to google app engine. It also has a flask server, a vue app for the front end, and a react app for the back end. It’s working now, but it’s way more than I need for a blog and has less feature than something completely prebuilt. There is zero SEO built in, no comments and the blog server takes a minute to warm up if no one has visited for a while. I also have a decent build/deploy pipeline that I built for quarantine.network that I could reuse.

I’ll miss being able to login and edit posts but I’ll be able to do that directly on github if I use the same pipeline. Jekyll admin also has a different editor. If I ever want a back end again, I think I can adapt that to something I could deploy and work directly with git. That would be a fun framework to throw together but it hasn’t made it on a to do list yet.