I’m sitting at home this morning instead of going out running because I overdid it over the last few days. An attempt to work out some ankle issues from an injury years ago had some adverse affects. I wiped out on a trail shortly after moving to Seattle several years ago twisted my right leg. I’m usually pretty good about landing but I was on the edge of a steep hill and I had to make the split decision to land badly on the leg or risk falling down the side of the hill on old pointy tree stumps and other unknowns. I still think I made the right decision in landing badly but it took me out of running for several months. I lost a lot of the momentum that I had built up in running in Minneapolis. In the years I’ve been in Seattle, I never really got that back.

It was a mistake to not follow it up with some doctors visits and a mistake not to get some physical therapy. At the time, I was waiting for my work’s health insurance to kick in. There was a few free physical therapists that visited running stores that I went to talk to. That gave me exercises to help with the recovery. It still kept me from running for a few months and it scared me off trying to run with the trail running groups that I’d been so excited to join up with when moving to Seattle. The exercises got me a to a place to where I could run without pain but by then I’d fallen out of habit, in running, gained weight, and the lack of stability in the right leg meant that trail running was more dangerous than before. I don’t blame my past self for not taking recovery more seriously or trying harder to get re-motivated. Moving was a big change, a lot of things have happened, I was dealing with issues I didn’t even know about. When I look back, the wipe out and injury does seem like an ending and I feel resigned to think about it that way.

In the time since, the wipe out, I have come to appreciate the effectiveness of focused physical therapy. A few days ago, I was doing some exercise for an unrelated shoulder injury. The shoulder is doing much better and I started to think about the ankle again. A couple of stretches confirmed that the ankle could only bend less that fifty percent as well as it’s counter part. Thinking that I might have found one of the reasons why I haven’t been able to get up to a decent speed, I enthusiastically dove into the exercises I had done years ago to recover the first time. This was a mistake. Somehow I destabilized the OTHER ankle. When I went out running over the Friday, my stride was off and I came back in pain. I took the day off on Saturday but Sunday did not turn out any better. The ankle is feeling more stable but something messed up my form and the slightest shift from a correct foot landing is excruciatingly painful. If things don’t get better after taking the next two days, off I’ll head in to PT again and maybe finally fix the cursed ankle issue.

Despite pain at the end, the trail run I went on Sunday was mostly okay. I went out with the intention of going on a long run but ended up exploring some sections of trail behind Green River College. These were a pleasant surprise to find when I moved to Auburn. On Google maps, the trails look like a mediocre paved walking path for faculty and students to wander through on their lunch break or between classes. When you get there, you see that the walking path does exist, but it ends at this fantastic overlook of Mount Rainier. Around the path, there are all these dirt trails with varying degrees of difficulty. It’s a proper forest and going into the trails behind the college feels like a real escape into the woods. Having a place to run that is surrounded by forests is infinitely better than running on the sidewalks on the road. 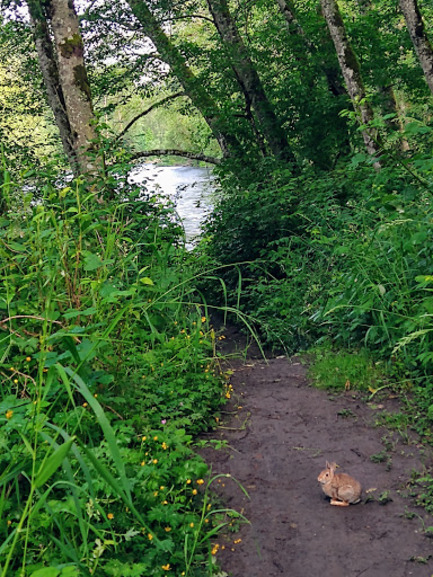 The rains from the night before had made parts of the trail especially muddy. The soft ground was probably good for my ankle but I did have to hose down my shoes when I got home. I’ll probably have to invest in another pair for trail running at some point.

Taking few days off is worrying. I’m worried about losing momentum. When I started running, I’d jog in place at traffic lights because I was worried that if I stopped, I wouldn’t start up again. i still see plenty of newer runners doing the same thing. Eventually, they stop doing this when they realize it’s a waste of energy. The goal is to run as far and efficiently as you can. The fear of stopping gets replaced with a decisive focus to rest and regain some energy to put into the rest of the run. The fear isn’t unfounded, momentum is important, but momentum doesn’t need the physical manifestation of jogging in place. You can maintain momentum internally while waiting for the light to turn green. That’s what I’ll be doing the while I’m taking the next couple of days off.