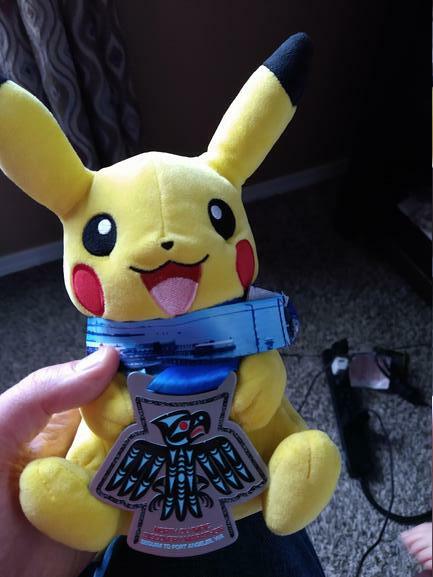 I finally have a few minutes to sit and type out a report on how the race went. It went well. My family and I quite enjoyed the drive out to Port Angeles, WA. We took a little detour to spend some time in Port Townsend on the way out. Traffic wasn’t bad and we made it in time to pick up my race packet shirt.

There wasn’t any issues with pickup. Signs were clear and there was plenty of parking at the Red Lion Hotel where everything was being run. I was a little disappointed the race expo wasn’t a bit bigger. I know it was a small race so it’s not really an issue. I was just thinking about the expo at Twin Cities or other races where I could spend more time browsing. I’m always short on race gear these days and shopping online for clothes isn’t something I enjoy. My preferred local running store is still way back in West Seattle and the bridge is still down so I was thinking of picking up a few things.

We stayed at the Quality Inn close to the finish line. The room wasn’t anything to write home about but we were able to see the Olympics Range and the Puget Sound if we looked at just the right angles. Race weekend made it a little more expensive that I would have expected for a Quality Inn but the location was perfect and the staff were very nice to us. The kid was a big fan of the free juice in the lobby.

Restaurants were busier than expected. We tried a few but either they were had a long wait or didn’t look kid friendly. We ended up getting burgers and drinks at the The Rail and took them back to the hotel. This probably worked out for the better. I’m a big fan of this beer “to go” concept and I hope it continues past the pandemic. I really didn’t want to deal with the stress and noise of busy restaurant while helping a four year old deal with the stress and noise of a busy restaurant so I was relived when we had to get food to go. We were able to sit in the hotel room eating fries and watching Raya and The Last Dragon on my phone watching the sun set on the ocean an the mountains.

The half started at 8:30 AM. I followed my normal routine of getting up at five. Slept fine despite being able to hear every step the room above us made. There was one goal in getting up that early, having coffee and following a routine. I’m not going to elaborate but I’ll say everything went smoothly. The hotel had breakfast available at six so I was able to grab a few things and talk to some fellow runners that were doing the same. I’ve had very little interaction with other runners other than morning nods from across the street and Strava over the last year so that alone was nice.

Got on the bus to the start around 6:45. We might have been the second batch of runners to be driven to the start. The positive part of that is that the port o potties where pristine. The negative was that there was plenty of time to wait and it wasn’t warm. It wasn’t too cold but it was windy. I brought an extra shirt to discard but I think I should have done the garbage bag trick too. I warmed up doing a lap around the soccer field and found a wind break behind the only building. 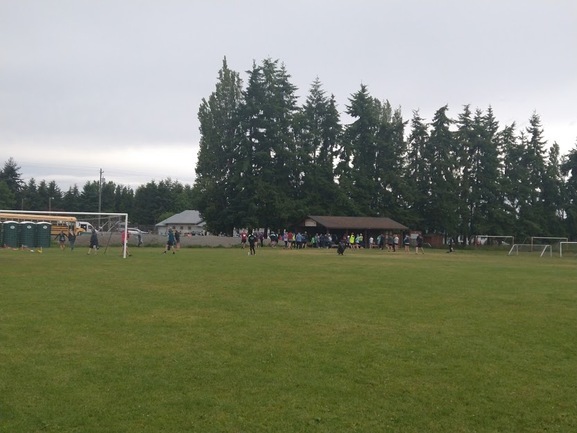 The start was staggered for COVID reasons although the runners were still somewhat crowded together waiting. I’d forgotten to update my expected race time and had picked up my packet at the last minute. This meant I was way in the back. The corrals where arranged by letters A-V and I was V.

The corral placement didn’t really hurt my start. The small groups meant that everyone was already spread out and there was plenty of room to run a little faster without being obnoxious or constantly weaving in and out of other runners. I did go out a little hot at the start. Garmin has this pacepro option that you can apply to courses. It gives you a series of segments and paces you should run them at to meet a goal. I’ve used it a few times in training runs and found it helpful. It’‘ll give you an update if you’re behind or ahead of your goal. I pulled in a copy of the race and set it up the night before for a 1:35 goal time. My problem was that I was reading the - seconds / + seconds incorrectly until about mile 2. My head saw negative and interpreted it as “negative” so I thought I was behind when I was ahead and ended up speeding up more than needed. There was a moment of a mini panic wondering why it was so hard to get up to speed until I realized what was going on. I don’t think it did too much damage but it shook me up a bit.

The run went pretty well. I fell into a pace and enjoyed the twists and turns of the paved trail through the woods. The biggest downside of not getting into the right corral was the water stops. I was running at a much faster clip than the people around me and had no intention of slowing down or stopping when grabbing a water like many others around me were doing. I had to jump to avoid runners ahead of me that had stopped in place ahead of me, yell out “sorry! excuse me, etc..”. I felt like an ass because I knew it was entirely my fault that I was running in the wrong group. Did my best not to be a disruption and still race the race. Will take care to get out in front next time so it’s a non-issue.

The way the half is set up is there are a few significant hills on the first half of the half but most of the rest is downhill or flat. The hills were fun. The two big ones were both canyons so you had a steep downhill followed by an immediate steep up hill. Meant you could save some effort going back up the hill by really leaning into the momentum on your way down. It takes some effort and practice to let gravity do all the hard work while still landing in a loose but controlled way that doesn’t wreck your leg muscles for the rest of the run. Made me glad I have so many hills nearby for practice. I lucked out on the second steepest hill and there was only a single person ahead of me. Was able to just fly down without worrying about knocking anyone over and then glide up the other side. Getting that extra boost in speed and being able to rest up a bit made a huge difference in how I was feeling about the run.

I stopped looking at the watch pace information around mile nine or ten. It was starting to stress me out and doing more harm than good. Told myself to run of feel and speed up if I could. The rest was flat so I just had to keep my head together for the rest of it. We were running next to the Sound now and the finish was in sight. I was still running at a faster clip than the group around me, that was confusing because I had no idea what corral anyone was in. I’d transitioned to much slower passing and was getting the urge to find a group to stick with. I’m not sure how that affected my pace. 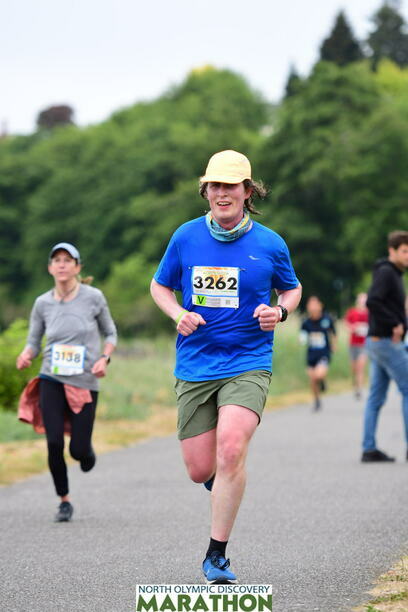 The last few miles went by too fast. I didn’t believe my watch when I checked and it said there was only a half mile left. I had this terrible realization that I’d zoned out too much on the flats and missed a good chance to pick up the pace. My legs felt fine and I was feeling good. I’d never planned to put everything I had into the race. The training plan I was on had only had standard long run scheduled. But I still felt bad about not putting a little more into those last few miles. Picked up the pace for the last three tenths of a mile and made it through the finish line.

The weather was near perfect running weather. The volunteers were great. The course was pretty and clearly marked all the way. In the end I got a PR of 1:37:15 and beat the me from nine years ago. I didn’t quite make the primary goal of getting 1:35 for the race but met the secondary goal of a half marathon PR. Also, I somehow got third in my age group. It was a good race. Would love to go back next year and try the full.

The medal was nice although I wish there was some more clear distinctions between the half swag and the full swag. Gave it to the kid. The kid gave it to Pikachu. Everyone’s happy

Award came in the mail: 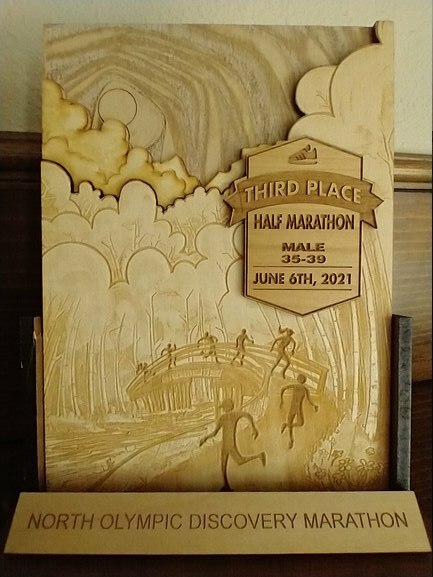 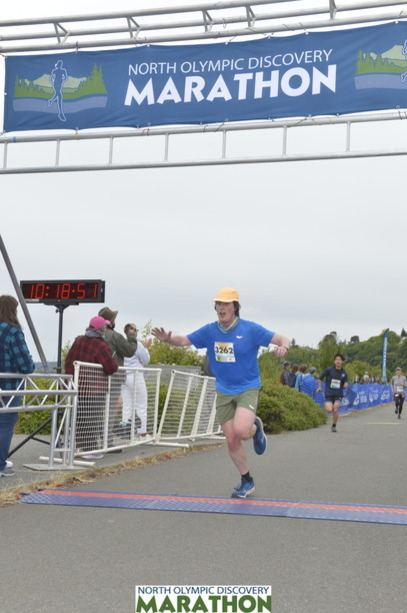