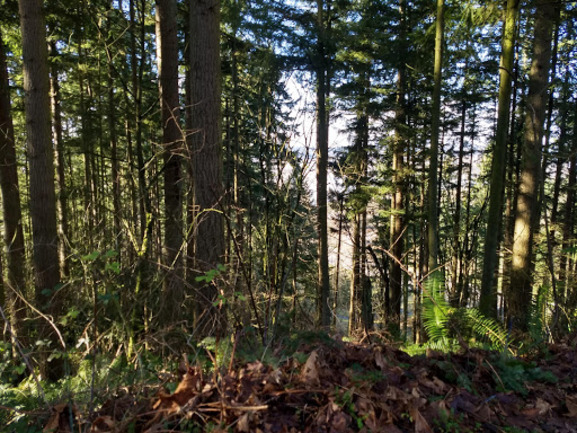 Trail in Kent from Sunday’s run

I’m taking a break from writing about testing.

That work is slow going. Finding what I really want to say is taking time. Only being able to write in the hour or so I may get on the weekend and edit a few lines on the train ride into work doesn’t help either. Regardless, I’m getting my feel for writing back and slowly getting more efficient. It’s a good exercise for me to go through to organize my thoughts on testing and to do it under time restraints.

Today, I want to write about running and the progress I’ve been making. It’s been about a month and a half since I started running regularly again. The longest run I’ve been on is fifteen miles. My pace and form is improving. Somehow I’ve been able find time to run, exercise and get enough sleep. It’s much less stressful to make the changes in diet and schedule this time. There’s only a few things that I’m doing that I’ve not done before so it’s taking less of an initial push to switch gears. I’m benefiting from the thing that always happens to me when making time to exercise and sleep. I’m forced to schedule. The schedule makes more time for everything else, the exercise and sleep gives more energy and focus to get everything else done more efficiently. Somehow, by doing more I end up with more free time and the energy to enjoy it. Who knew that getting more exercise and focusing more on getting better sleep would have positive effects?

I also found motivation to finally get some doctors appointments scheduled. The running made it clear that I my shoulder still wasn’t quite right. Maybe I knew that but had been avoiding it. I wasn’t getting even power from both legs because of how I was activating back muscles and the arm would get fatigued from swinging. So, I am back doing physical therapy exercises. Running’s given me enough motivation to focus on something I should have taken care of two years ago. The leg power is back and the left arm isn’t getting fatigued as easily as it was. PT sounds like a drag but I’m noticing tiny improvements in my daily life from it. Dishes, I’m excited about doing dishes without the left shoulder getting sore. That alone is making it worth it .

There are still bad runs and frustrations. I took off running without a plan and pushed a little too hard and didn’t take enough recovery days . The good news is that I caught myself earlier than I usually would. I noticed some bad form caused some significant ankle pain. I pushed through like an idiot and at the end of the run walking was difficult. It never would have gotten so bad if I had ramped up the miles slowly. I should have added two miles to my longest distance per week instead of six. After some soul searching and considering the need for stability, I went to Google and found a base training plan.

This is the first time I have been following an actual plan. Previous marathon training has been based on vague feeling around the knowledge that I should get up to a 20 mile run and give myself enough recovery time between long runs. It did the job sometimes. I was avoiding plans, because I just wanted to run how a felt whenever I felt. I was also afraid that I’d lose motivation to run if I started adding chores, discipline and spreadsheets to the activity. That might have been the right call at the time but not now. My goals have changed. I’ve been doing soul searching since deciding I wanted to run Boston. I generally like myself. I hover around a weight that I like to be. It goes up and down but never to an extreme. I like my quirks around avoiding watches and running on feel. But, and it’s a big but, the self I like doesn’t seem to have a chance at improving enough to have a shot at a BQ. Change is happening and even if I like who I am, that doesn’t mean that that version of myself needs to hang around forever. Change doesn’t mean that I won’t like future self and it doesn’t mean I don’t like myself. Yes, the prospect of spreadsheets, plans, weight loss and GPS tracking has given me a bit of an identity crisis.

The dialed back base training is going well. The structured rest days helped the ankle recover . I also had a great long run on Sunday. It was a sunny day . The plan called for easy with a fast finish . I was able to enjoy some trails I liked and then run at tempo the last few miles. The big mental milestone I hit was on a hill on the way home. I was running at a what was supposed to be a tempo pace when I hit it. I maintained the cadence. Towards the top, my legs started to get sore but I was doing great on the cardiovascular. To me, that means I’m in a good place to keep speeding up. It means that I am seeing results from sticking to the plan. I think I am at peace with the need to change and running with the phone and following a plan isn’t ruining my runs like I thought they would.

I’ve learned to embrace the bad runs. It’s an opportunity to analyze what I’ve been doing. What did I eat, how much sleep, am I overt training. Did I overthink everything and have a panic attack? What do I need to do to work around that?. One frustration is that the weight loss is slow going. I can’t get around the fact that if I want to make a realistic go at Boston, then I need to drop the fat. I also know that increasing training and reducing calories at the same time is a bad idea. So, I’m frustrated but not discouraged. The best I can do is focus on base fitness and keep a healthy, realistic eye on how much I eat.

Well, that’s enough about running. I guess I should go back to agonizing about every line in the testing blog entry.

Photo of the Green River from Sunday’s run